In this day and age we depend on electronics and computers to live.  Backpacking through the wilderness may not require these, however it makes life easier to carry them.  My electronics were an important part of my PCT gear.  Choosing rugged and reliable electronics is an important gear selection choice for any long distance backpacker.  In this post I will review what I carried.

I took with me:

With the exception of my phone (carried in my pocket), watch (worn), and inReach (clipped on the outside of my pack), I stored all of this in a quart sized ziplock bag.  I also put a small desiccant package in there to soak up any electronics damaging moisture. An exceptionally uncluttered charging station on the Pacific Crest Trail.

One of the biggest reasons I was unable to leave towns early was waiting for devices to charge.  Even finding a place to plug in your devices can be hard.  Many of the charging stations are overloaded with everyone’s stuff causing it to take 10x longer to charge than normal.

The Anker dual port USB charger was a life saver on trail.  With two ports I could charge my stuff twice as fast.  The Anker products also have a feature that automatically adjusts the voltage output to certain devices speeding up their recharge time.  It was important to me that everything I carried could connect to the same USB cables.  I didn’t want to waste extra space and weight carrying extra charging accessories.

For a portable battery I used the smallest Anker PowerCore battery.  It is pretty tiny and lightweight, about the size of a lipstick container.  The battery charged quickly and held enough juice to recharge my phone a little more than once.  I could also charge my headlamp or inReach off of it.  I didn’t go through a lot of power on trail, so this small external battery was enough for me.  If you plan on using your phone or other devices extensively on trail, you may want to look into larger battery offerings.

I wore a standard Casio watch all the time.  It was waterproof, cheap, and just worked.  The display is large and easy to read, showing the day of the week as well.  It is not uncommon to loose track of the day, which matters if you are trying to pick up packages at the post office.  The illuminated dial allowed me to see the time at night, and also served as a lower power flash light for finding gear in total darkness.  The stopwatch function was handy for estimating my pace.  It also has a function where it beeps every hour, helping me keep my water intake on schedule in the desert.

The headlamp I used was a Black Diamond ReVolt.  I know some people used their phone flashlight in lieu of a headlamp, but having one is so convenient that I would never go backpacking without it.  The main feature of this lamp was its ability to be recharged with a micro USB port.  I liked that I could still put normal AAA batteries in it as well.  The light output from the single spot was enough for hiking along the trail at night.  Even on the lower levels of dimness I could still see where I was going.  The red light was great when at camp, because it did not stress my eyes out like the bright white light.  The wider beam was useful in areas where I wanted to see more of the ground, but I did not use it enough to say it is a necessary feature.

Overall the headlamp worked great for me while backpacking, but I did have a few issues with it.  The light was easily turned on while inside my pack leaving me with dead batteries a few times. There is a locking function on this light, so make sure you use it!  I also had some issues with the lamp housing.  It cracked in one area, and I think moisture may have gotten into the electronics causing a short that drained the batteries.

I carried a DeLorme (now Garmin) inReach on the PCT.  I luckily never had to use it.  Carrying it did give me peace of mind in the event of an on trail injury.  I did have quite a few issues with it though.  I found the battery life only lasted a couple days if on. Because of this I kept it in the off state so it would have power if I needed it.

I also accidentally turned on the SOS TWICE on trail!  Thankfully I caught it both times after noticing the flashing screen on the outside of my pack.  I would have felt so embarrassed to trigger a search.  Not to mention the wasted time and resources of the men and women who would come to find me.  Before you call out my stupidity, yes I had the lock switch on.  This seems to be an issue that others have had as well.

I also had some support issues when I wanted to stop my subscription.  I was still billed even after unsubscribing (twice).  Ultimately I did get this fixed.  Since the money is already sunk into the unit I will continue using it and put something over the SOS button.  The company is now owned by Garmin, so maybe the subscription will be less of a hassle to deal with as well.  If not I will be getting a different personal locator beacon for wilderness backpacking adventures.

Perhaps the best multi tool I had on the PCT was my smartphone. I had topo maps on it, the Halfmile app for easily determining my location, music and podcasts to listen to, access to the internet for doing research while in town, a camera to provide all the great photos you see on this blog, an extra flash light, and most importantly a phone to call my worried family every now and then.

To conserve battery life I kept it in airplane mode at all times.  Do this unless you want your phone dying in a matter of hours struggling to get signal in the wilderness.  I actually found that turning it off overnight (and back on in the morning) would take up more power than leaving it on during the night.  Test this out with your phone, as the new one I have will uses more energy in airplane mode.  Taking the occasional picture or listening to music didn’t take use much power, so I was usually able to use my phone throughout an entire section without running out.  If I ever did, I charged it off of my external battery.  I had Verizon as a carrier which proved to have the best overall reception and coverage along the trail.

When backpacking, or any hiking for that matter, you need to get a good rugged phone case (currently using a Unicorn Beetle Pro). I dropped my phone many times, but near the end of the trail it fell out of my pocket and hit the screen. It shattered and gradually faded into blackness. It was a little bit of a hassle to get a new one.  I ended up getting a ride into a larger town thanks to Andrea Dinsmore (Thank you!!) where I was able to get a new one at the Verizon store there.

Headphones were a lifesaver from the monotony that eventually sets in on a thru-hike.  Long days of walking down a path headed North can get to you.  Having something to listen to can keep you sane and make the day go by quicker.  Part way through the trail I got a Spotify subscription.  This was great because I could now download almost anything and listen to it offline.  I also listened to a lot of podcasts on trail, Radiolab being my favorite.  Don’t bring expensive headphones hiking.  I think I went through 3 different pairs because they were easy to break.

Picking out gear is hard.  I hope the information I provided is helpful for anyone planning a thru-hike or other backpacking adventure.

What electronics do you like to carry when you are out hiking? Let me know in the comments. 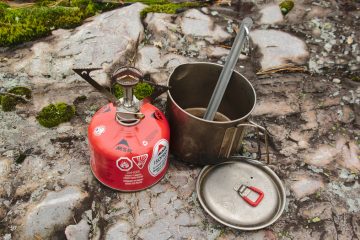 My cook stove system is one area of gear that I was really happy with on the Pacific Crest Trail due to how well it worked for me.  Getting to camp and sitting down at Read more… 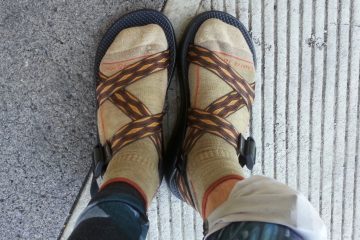 Shoes are one of the most important pieces of backpacking gear, even more so on a thru-hike.  If you can’t keep your feet healthy and happy, you won’t be getting very far.  In this post Read more… 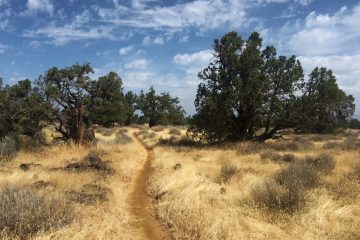 What I Learned on the Pacific Crest Trail

Backpacking the Pacific Crest Trail is a momentous journey. I spent months out there. Much of it alone or nearly so. Just walking through the mountains and the woods. On such a long trip, we Read more…