In late February a winter storm passed over the Upper Peninsula, and I wanted to take advantage of the newly fallen snow.  In the winter it can be hard to find accessible areas while staying off the beaten path. If you don’t have a snowmobile to travel the back country roads, you are often limited to heavily trafficked areas. But I knew of one that was plowed, and even had a lot to park your car in.  So I decided to go snowshoeing in the McCormick Wilderness.

The McCormick Wilderness is one of the Upper Peninsula’s most remote locations. Located about 10 miles north of Champion along the Peshekee Grade Road.  Even though it had snowed the previous day, this road was still plowed. The drive does take a while, as poor road condition and bumpiness makes it slow going.  After traveling down the road for a while, you will see a small parking lot with a pit toilet off to your right, and a sign for the McCormick Wilderness. There are only two trails on the south end of the park.  The White Deer Lake Trail which takes you north into the park, and part of the North Country Trail which cuts East/West through the area.  There is also an entrance at the northern end of the wilderness area, which takes you to a trail to Yellow Dog Falls.  I tried driving up there once this winter, but the roads weren’t plowed far enough. It would have been a long hike unless you have a snowmobile to go the extra distance.

This area was once owned by the McCormick family as a backwoods vacation retreat. Around the turn of the 20th century, they developed the area by building trails and cabins.  They even dug a canal between Bulldog and White Deer Lakes to allow easier travel by boat.  Over time the McCormick family abandoned this grand camp, and the land was given to the government in the late 1960’s.  In 1987 the government designated the McCormick tract a federally protected wilderness area.  This eventually led to the dismantlement of the various structures. However remains of these developments still remain.

Snowshoes are a necessity to deal with the large amounts of powdery snow that fall in this area.  When we got there, the trail was slightly packed, but it appeared no one had come through since the previous day’s snowfall.  After donning our snowshoes, we set off into the wilderness.  Heading out of the parking lot, you will traverse a beautiful bridge over the Peshekee River.  Soon after the river crossing, you will see the trail fork off to the right.  This is part of the North Country Trail.  Head straight to continue to the White Deer Lake Trail. The bridge crossing the Peshekee River into the wilderness.

For our hike that day we headed northward up to the lake, hoping to see the foundations of the old cabins in the area.  The White Deer Lake Trail is pretty easy to follow.  Our path was wide with undulating hills, it was no issue getting to our destination. This area is pretty swampy, and I have heard that non winter visitors should wear rubber boots or waders through sections of the trail.  A couple of feet of snow and my snowshoes kept me above all the muck.

There is nothing more peaceful than wandering through a quiet forest in the heart of winter.  The only sounds are the creeks and cracks made by the swaying trees in the wind.   Damp snow from the previous day’s storm clung perfectly to the pine branches along our route. Snow clings to the trees along the path to White Deer Lake.

We reached the lake in no time at all, taking only a couple breaks on the journey to photograph the beauty of the Upper Peninsula, and drink some water.  While at the lake I wanted to cross over to the small island, which led to my first time walking on a frozen lake. The though of this feat was a little nerve-wracking.  What if I fell through the ice?  It was so far in the middle of nowhere, and with snowshoes strapped to my feet I would surely be in trouble if I did.

But I knew the weather had been abundantly cold, and the lake was small enough to have a sizeable crust of ice on top.  Before crossing I made sure to survey the area to check for signs of ice breakage, like wet or sunken areas in the snow.  After gingerly stepping out on to the ice, I walked the 50 or so yards to the island. Foundations of an old cabin on the island.

The island is pretty small, and well vegetated.  Even through the thigh deep snow, you can still see the signs of the McCormick family camp that once stood here.  A word of caution for those making a similar trek in the winter: keep a distance from the cabin foundations. There are parts buried under the snow, and you could potentially trip over a hidden pit.

On the way back to the car our trip was a breeze, as the snow was nice and packed down from our earlier journey.  Overall it was a fantastic experience snowshoeing in the McCormick Wilderness.  I was pleasantly surprised in the solitude this day hike offered, yet the ease of access to get there.  I will definitely be returning after the snow has melted to investigate the region further.

If you want to learn more about the McCormick Wilderness, http://www.mccormicktract.com/ has all the information you are looking for.  Including historical information, pictures, maps, and more. 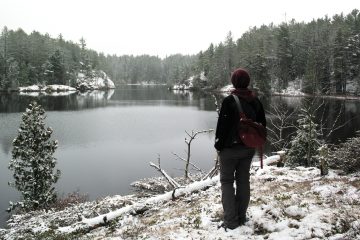 Michigan’s Upper Peninsula is known for it’s long harsh winters. In leu of a regular post, here is a collection of my favorite photos I took this winter. To read more about my McCormick adventure, Read more… 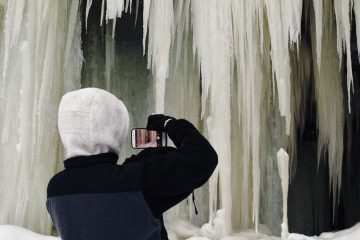 The Eben Ice Caves are one of the most popular winter attractions in the Upper Peninsula. Located in the Rock River Canyon Wilderness, these caves are easy to get to and spectacular in their beauty.  Read more… 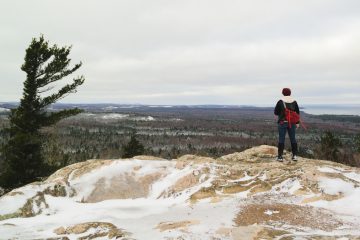 A Winter Hike to the Summit of Hogback Mountain

In mid November I woke up to a fresh layer of snow on the ground, covering all of the trees in a most delightful manner.  I thought to myself: damn, this would be a perfect Read more…