The Superstition Wilderness.  Home of the legendary Lost Dutchman’s Gold Mine.  While the thought of finding millions in gold buried somewhere in the desert is intriguing; that was not the purpose of this trip.  Instead I wanted to explore an area I had not yet been to after moving to Arizona.

The initial plan was to hike out and camp near LaBarge Spring, but that had to be canceled as I didn’t get out on the road soon enough.  So instead I decided to camp somewhere near Bluff Spring.

After driving down the well maintained gravel Peralta Road for a few miles, we arrived at the parking lot for the Peralta Trail Head.  Seated below the Dacite Cliffs, this is one of the most popular trail-heads in the Superstition Wilderness.  Arriving on a Friday afternoon, the parking lot was nearly full. I was initially worried about the trail being too crowded. But after looking through the USFS sign-in sheet, it became clear to me that I wouldn’t have to struggle to find a camp spot. Probably 99% of the people who had registered that day were merely day hikers.

So I donned my backpack, laden with extra water in case Bluff Spring was dry.  Setting off down Bluff Spring Trail No. 235 you are immediately presented with quite a decent climb up out of Peralta Canyon to the top of a ridge overlooking the valley below. The trail through this section has some uneven rocky spots, but not too many for it to be an issue. After topping out on the ridge there is a bit of level terrain before dropping down into Barks Canyon.

The descent into Barks Canyon and its enclosing scenery was one of my favorite points on this trip. The trail leads you down into a wash of smooth stone at the base of the canyon.  You would definitely not want to be in this area when it is raining or there is risk of flash flooding.

After ascending out of Barks Canyon you are greeted with the amazing view of Bluff Spring Mountain to the north and Weavers Needle in the distance to the west.  From here you begin a descent into another canyon, this time Bluff Spring Canyon.  Unlike the previous section, the trail through this segment is pretty easy.

Venturing through Bluff Spring Canyon we came across a medium sized campsite situated right next to the trail. It was large enough for a few tents.  Throughout the previous couple of miles the rocky terrain yielded few locations to camp. Along with the impending setting of the sun, we decided to stay there the night.  However the ground wasn’t too great, being rocky and unfavorably sloped.  Me in my penchant for finding awesome camping spots decided to scout the area further.

I found an obscure trail that appeared to lead up the neighboring hill. So I followed it to see what I could see.  Boy am I glad that I decided to do this.  After following the pathway up the slope, I came across a grove of chain fruit cholla. The trail seemed to disappear, so I wandered up to the top of the hill to observe the canyon below. It was then that I noticed a nice flat piece of ground on the edge of the hillside.  A perfect spot for a tent.  This would be our camping spot for the night, I thought to myself as I ran down the hill to fetch my girlfriend and show her my find.

Little did I know that this campsite was actually the historic location of an old mining site called William’s Camp.

It was hard to find any information about the history of William’s Camp online. The only resource that I could find were the writings of famed Superstition Mountain historian Tom Kollenborn. Apparently the mine was in operation in the late 1930’s under the direction of a man by the name of William Linesba. Linesba believed that the famed Lost Dutchman’s Mine was located in the area, and named his mine ‘Lost Dutchman Mine No. 1’ accordingly.[1]

Another resource from the Arizona Geological Survey document repository stated that the William’s Camp area had been surveyed by the U.S. Bureau of Mines Mineral Land Assessment in the 1980’s for mineral resources. However no such evidence was found.[2]

After the clouds cleared up that night, we were able to see the stars quite clearly. Surprising because of the close proximity of the Superstition Wilderness to the sprawling Phoenix metro area.  We were also lucky to catch the tail end of the Gemind Meteor Shower which had peaked the night before.  Shooting stars blazed across the sky as we ate our dinners and prepared for bed.

After waking up early to take some sunrise pics, I was disappointed in the brilliance blocking morning cloud cover. Instead I explored the area around the old mining base a little bit more. I was able to find many signs of its previous inhabitants.  Rusted tin cans, pottery shards, metal rebar, and wire were strewn along the ground.

I ventured further up to the cliff base of Bluff Spring Mountain, and found the workings of the old Lost Dutchman Mine No. 1.  Large tailings piles and a shaft of unknown depth were all that remained.  I do NOT recommend going up to the old mine workings.  The loose gravel tailings and steep grade make it a dangerous ascent; and the possibility of a cave in to a hidden shaft, or falling down into the open one are too great.

After exploring the area I headed back down the steep grade back towards camp. Time for some breakfast and coffee. Thereafter we packed up our camp. It was time to hit the trail towards Bluff Spring.

The trail through Bluff Spring canyon was quite easy. Nearly flat compared to the ups and downs of the previous day’s hiking. The path took us along winding creek beds, where stagnant water rested in small rock pools. At least there was some water available, no mater how undesirable it looked, in case our intended water supply was dry.

Let’s just say that Bluff Spring isn’t my all time favorite water source.  The flow rate was pretty slow, but not the worst ever. That wasn’t the bad part though.  Even after filtration, the smell was sulfurous, and left a lingering irony aftertaste.  I would rate it a 2/5 stars on my non existent water rating scale.

Upon resupplying our water, it time to hit the trail.  After some backtracking to the Lost Dutchman Trail No. 104 junction, we headed south east towards Miner’s Summit.  The ascent was gradual, winding through riparian shrubbery.  Slowly the path gave way to rocky mountainous desert with 20 foot tall saguaros looming above us.

As we peaked out over the saddle at Miner’s Summit, the Miners Needle came into view with its signature hole formation.  After the short ascent, we took a small break to eat some glucose blocks. Then we began the switch back descent down Miners Canyon.

The descent down into the valley of Barkley Basin below was pleasant.  Not too steep, and it provided us with many a great view of Miners Needle and the surrounding Superstition Mountain scenery.

After hiking up and down through canyons and mountains for the past day, the relatively flat and gently winding path through the Barkley Basin was an easy finish to this trip. Small shrubs, teddy bear cholla, and saguaros lined the path back to the parking lot.

There was one final hill to climb, and as we hiked over it the familiar site of the Peralta Trail head could be seen below. Framed by the Dacite cliffs behind it.

Overall this was a pleasant experience for my first time backpacking through the Superstition Wilderness.  The unexpected find of William’s Camp was a refreshing surprise.  I can say for sure that this won’t be the last time I venture into the Lost Dutchman’s back country. If you are interested in following my footsteps on this trip, you can view this map that I made. 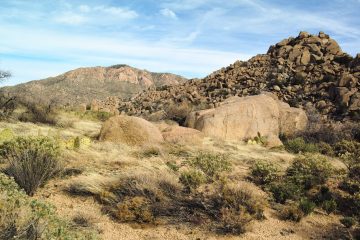 Backpacking the Ballantine Trail to Boulder Flat and Ballantine Canyon

It was a cool winter weekend, and I had a couple days off, so it seemed like the perfect time to go exploring Arizona’s desert and do some backpacking. Looking at my maps I decided Read more…