It was a cool winter weekend, and I had a couple days off, so it seemed like the perfect time to go exploring Arizona’s desert and do some backpacking. Looking at my maps I decided to head out to the Pine Mountain area. Located north of the Four Peaks Wilderness in the Mazatzal Mountain Range. There laid Ballantine Trail, a particularly intriguing trail. The thought of seeing snow and pine trees was a good one. Especially after weathering the hot Phoenix summer. It would be a nice break from the typical desert scenery of cacti, shrubs, and dirt.

We were originally planning on hiking out from Cline Trailhead, hoping to start higher in elevation, and see the forested Pine Mountain firsthand. But after driving down forest road 143, we found a closed gate blocking the path. So we turned the Jeep around and headed north for the Ballantine Trailhead. Located right off the Beeline Highway, the turn is easy to miss. At the trailhead you will find a small gravel parking loop, and a barbed wire fence with a gate that leads to the trail.

After getting our packs on and doing a last minute gear check, we began the arduous journey that lay ahead. The trail starts out with a small loop section. If you go right the path will lead you up a small hill that gives you a nice view of the highway and valley below. If you go left the trail heads towards Pine Creek, and avoids the unnecessary hill climb.

The first trail junction will connect with the other side of the small Pine Creek loop. Follow the signs for Boulder Flat. The trail up the mountains follows a ravine, with Camp Creek snaking around to your right.

The beginning of the hike is dominated by saguaros, teddy bear cholla, and many of the typical Sonoran Desert shrubbery I have come to expect from Arizona. As you ascend in elevation, the saguaros disappear. You also begin to encounter piles of large boulders studding the landscape.

Some areas show the scars of a fire that occurred some time ago. The blackened bases of Saguaros, still appearing healthy and growing, are found throughout the area.

Overall the trail isn’t too steep, raising ~2000 feet in the 4 miles it takes to get to Boulder Flat. But most of the ascent is in short steep bursts, with more gradual areas in between.

The footing along the ascent can be tricky at times. With loose rock, and slippery gravel throughout. As you climb over the steep saddles leading to the next flat area it becomes quite tricky. Laden with an extra 8lbs of water, I was glad I had brought my hiking poles with me. As the trail continued upwards some of the large steps and precarious footing would have been difficult.

This is definitely not a trail for the faint at heart.

Boulder Flat to the Corral

After the final push up a sharp climb you enter Boulder Flat. This last part was quite muddy from recent snow melt, and would be near impossible if there was too much water in the area. The trail appeared to be a few feet away from a waterfall along Camp Creek

While not exactly smooth, the rolling hills of Boulder Flat are a nice break from the last two hours I had spent on a continuous upward path to my destination.

The landscape of Boulder Flat was a bit different from the previous segment of Ballantine Trail. While large boulder piles abounded around us, the flora was a bit different. Dominated by long grasses and spotted with gnarled trees, this flat had a unique landscape that I had not experienced in any of my previous adventures in Arizona.

Dusk was beginning to settle in, so we hurried to the east end of the flat where a corral was marked on the map. I figured that there would be ample level ground for pitching a tent in this area. The lack of level ground along previous parts of the trail was worrisome to me. We had only passed two areas that I deemed appropriate for a nights rest.

But my worries subsided when we found a few candidates for our camp. I rambled around trying to find the most suitable area, and finally settled on a nice flat spot south of the corral. So we began to unpack and pitch our tent there.

In hindsight this turned out be be a poor campsite. As the sun began to set, strong winds began to blow from the east. Possibly funneled into the flat by the nearby Ballantine Canyon, gusts of wind confronted our tent.

While it wasn’t intense enough to rip stakes out of the ground, it made it hard to boil water with my pocket rocket. The wind also brought a rapid drop in temperature, which lead to a premature retreat into the walls of our tent.

The next morning we awoke not entirely well rested due to the fierce howling winds of the night prior. While the area was nice and flat for a campsite, next time I’m in the area I plan on heading a little further down the trail and camping by the corral. Just outside of the perimeter fence there is a grove of small trees and shrubbery to provide some protection.

Nonetheless we packed up some supplies for a short jaunt through Ballantine Canyon. Only taking essentials to lighten our load, we planned on picking up our tent and the rest of our gear on the way back to the trailhead.

The beginning of our journey into Ballantine Canyon was easy enough. Initially I was unable to find the trail that would take us into the canyon. It turns out you have to go through the old and weathered coral to get on the right path.

The mouth of Ballantine Canyon is similar to the rest of the Boulder Flat scenery. Grasses, small cacti, and boulders strew about rolling hills. By this time you will have diverged from following Camp Creek. The trail begins to hug Rock Creek as you head up into the canyon.

Rock Creek is seasonal, but I did find many small pools of water, some of them iced over. These puddles were likely from the snow storm a few days prior. I was hoping to find some running water to replenish our supplies, as I try to avoid still water whenever possible. But I knew that I could always fill up from these pools if I needed to

Starting out the trail is mostly on the south side, as boulders crowded the steep sides opposite us. We zigzagged across the dry sandy bed of Rock Creek a few times before climbing up higher onto the hillside of Ballantine Canyon.

Soon the open grassy areas changed to dense shrubbery. Dominated by thorny plants of all varieties. The path became clogged with prickly bushes a number of times. It would have been nice to bring my pruning shears, and do a bit of light trail maintenance. Often I could crouch or use my hiking pole to pry open a route. Despite that, impassable barriers of shrubs sometimes required an off trail diversion.

The trail through Ballantine Canyon was a bit tough to find at times. However there are some carins spread throughout to keep you on the right path. I am not sure what it is like in other times of year, but I wouldn’t recommend going very far unless you possess some basic route-finding skills or a GPS.

After some time exploring the canyon, we decided to head back to our Boulder Flat campsite and begin our trip back to the civilization.

Boulder Flat Back to the Parking Lot

Soon all our gear was packed up, and it was time to head back down Ballantine Trail to the parking lot.

The descent down was surprisingly tricky. Going up through the loose rock and gravel segments wasn’t too difficult. But on the way down it became a careful dance along the descent. I don’t usually bring hiking poles, preferring to trust my own legs. But I am sure glad I took them on this trip. Without them to steady my footing on the slippery slopes, I probably would have had a few tumbles.

As we made our way further down to the parking lot, the scenery soon returned to the typical Sonoran Desert vegetation.

The Ballantine Trail was a challenging but rewarding overnight backpacking trip. The ascent up was not the worst I have experienced, but the pervasive loose rock and tricky footing made it a formidable opponent. Getting to see snow and pine trees in the distance was refreshing. After moving away from the Midwest to the desert lands of Arizona, I was beginning to miss the familiar winter scenery.

I shall definitely be returning to the area, next time I hope that FR 143 is not closed so I can start at the Cline Trailhead and head up to Pine Mountain.

I made a map of the route I took if you are interested in going to the area.

If you are looking for other areas to explore in Arizona, check out my post on Backpacking to William’s Camp in the Superstition Mountains not far to the south. 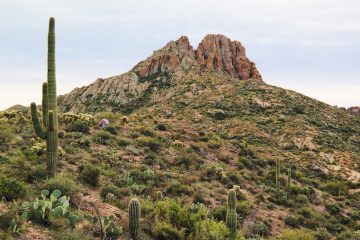 The Superstition Wilderness.  Home of the legendary Lost Dutchman’s Gold Mine.  While the thought of finding millions in gold buried somewhere in the desert is intriguing; that was not the purpose of this trip.  Instead Read more…